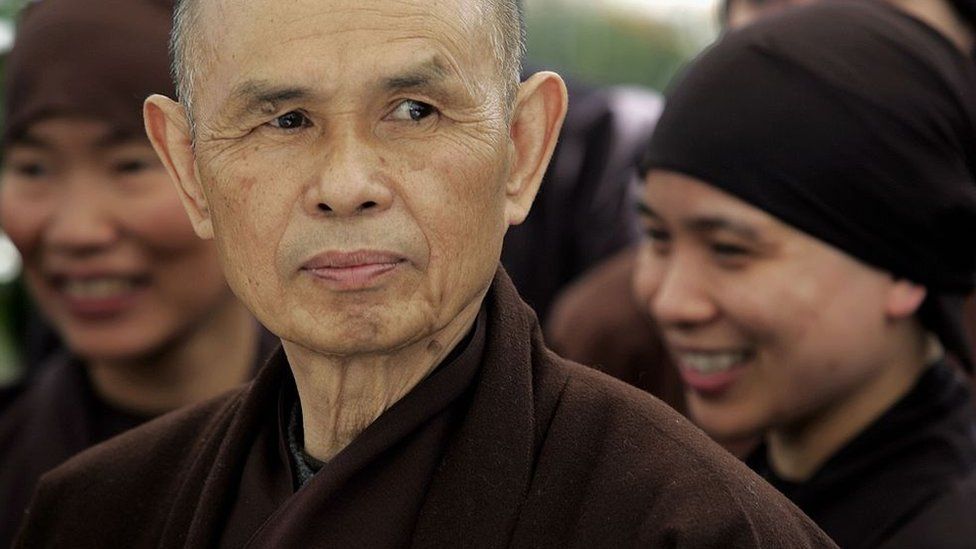 Thich Nhat Hanh, an influential Vietnamese Buddhist monk, has died at the age of 95.

His Zen teaching organisation, Plum Village, said the monk “passed away peacefully” at the Tu Hieu Temple in Hue, Vietnam on Saturday.

A prolific author and peace activist, Thich Nhat Hanh, is often referred to as the “father of mindfulness”.

On Twitter, his organisation called for its followers to hold Thich Nhat Hanh “in our hearts”.

Thich Nhat Hanh, was exiled from Vietnam in the 1960s after opposing the war.

During the height of the Vietnam War, he met with Martin Luther King, persuading the civil rights leader to speak out against the conflict.

King later nominated Thich Nhat Hanh for a Nobel Peace Prize, describing him as “an apostle of peace and non violence”.

After hearing of the monk’s death, King’s daughter Bernice shared an image of the pair together.

The monk spent decades in France after being exiled and went on to establish monasteries and meditation centres around the world, known as the Plum Village Tradition.

During his lifetime, he wrote more than 100 books that were translated into more than 40 languages. His last book was published in October 2021.

He travelled on regular speaking tours of Europe and the US, talking about the practice of mindfulness.

But his movement was hindered by Vietnam’s communist government in 2009, when his Zen centre in Lam Dong was forced to close.

In 2018, he returned to Vietnam and was permitted by authorities to spend his final days at the Tu Hieu temple.

It is not yet clear how the government will react to his funeral, which is set to begin in Hue on Saturday and last five days.