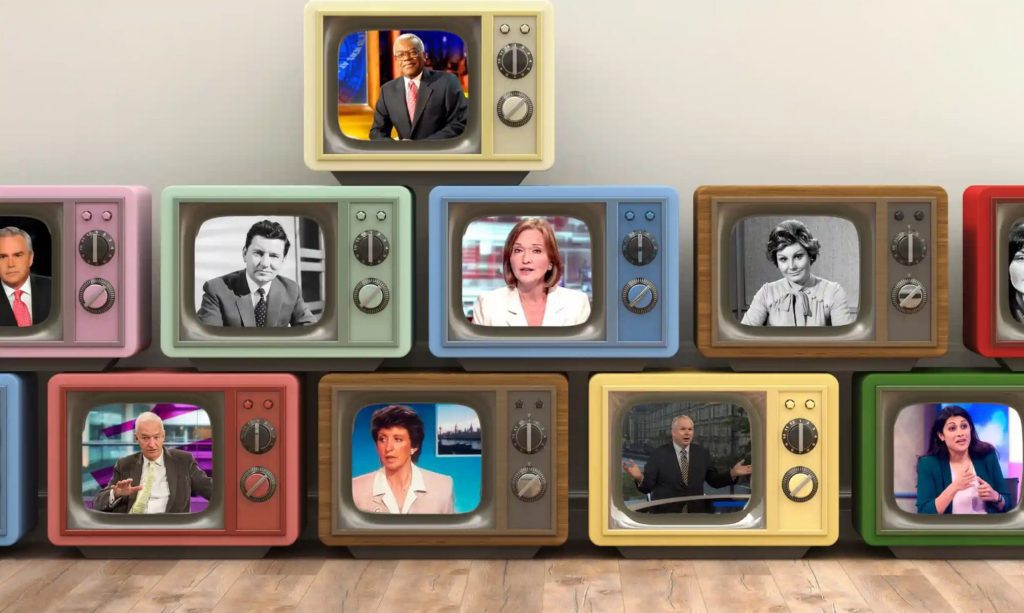 News broadcasting on television once meant a desk and an obligatory suit and tie. And even when female news anchors became as commonplace a sight on Britain’s prime-time bulletins as the sombre, clean-shaven men, the way to imply authority and impartiality was always to adopt a calm, formal tone of voice.

But with the departure this month of two of the great silverbacks of the news jungle, Channel 4’s Jon Snow and Sky News’s Adam Boulton, the future of the unflappable “voice of news”, coming out from above a sheaf of shuffled papers, is in doubt.

A former generation of male titans, ranging from Richard Baker, Alastair Burnet and Reginald Bosanquet, to more recent stars such as Trevor McDonald and Jeremy Paxman, are no longer handling our headlines. And recently Huw Edwards-watchers have suggested the Welsh journalist may also be preparing to leave his prominent role at BBC News.

Hourly bulletins from the network broadcasters have long lost their “appointment to view” status and have joined the general hubbub of satellite-channel and social-media updates.

This means the commercial identity provided by a consistent newscaster now has arguably much less value. In a news market led by instant reactions transmitted via viral gifs and memes, the heavyweight anchor suddenly stands accused of holding news back.

Among those assessing the value of the traditional format this weekend is Boulton himself: “Truth be told the news anchor has never really been a British concept,” he told the Observer. “We have news readers or presenters. And they have never really had the authority, or the public adulation of such as Walter Cronkite, Peter Jennings, Dan Rather or Tom Brokaw.”

Boulton, 62, who leaves Sky News with a “wrench” after 33 years, first serving as political editor and then from 2014 as editor-at-large, is stepping away from his chair in the studio in favour of longer form journalism. And, tellingly, all the great American anchors he cites are from the fading past.

Snow, 74, who will present his last C4 News later this month, is, for many viewers an emblem of fair-minded, liberal journalism. He, like Boulton, is a hardened hand who has tackled last-minute autocue changes, glib politicians and technical glitches live on air for decades.

Yet for one anonymous former television news editor, the change is long overdue. “These people, Boulton, Snow, or over on the radio John Humphrys and Jenni Murray, became national treasures. But this also made them unsackable, big beasts.” It is a problem, he argues, because some of those anchors who remain on screen are beginning to drag the news down.

Behind the scenes, the head of Sky News John Ryley is thought to be steering coverage towards a more agile, reporter-led delivery style. In fact, the prospects for the whole of Sky News are uncertain, with its loss-making future under its new owners, Comcast, only secured for another seven years. Times Radio’s new model is now thought to be influencing the agenda, with opinionated reporting and analysis becoming the relevant currency.

But then, Boulton argues, the job of being a straight news anchor was always a slightly uneasy one in Britain. “For a start the budget was usually more limited here. I remember being delayed at some German airport while Dan Rather’s private plane took off after some Nato summit or other and thinking it would be rather nice to be an American-style anchor – only to be brought back to earth by the refusal of BBC expenses to compensate John Cole for an ink-spattered shirt.”

Boulton suspects British news editors and producers were often resistant to the power of a presenter who had developed a public profile and a strong relationship with viewers.

“It is hard to escape the view that British television managers, those behind the screen, have always resented the talent in public view and used their power to curb it,” he said.

“The BBC was set up that way as a producer’s medium. In my experience independent television has always devolved more power to those in front of the cameras, but not too much. Reggie Bosanquet and Alastair Burnet were national figures but were also widely mocked for their alcoholic intake. Over on the BBC, Richard Baker, Robert Dougall and Kenneth Kendall were just as well-known, but not for their opinions. They were mellow voices reading scripts.”

When female anchors, such as Anna Ford, Angela Ripon and Sue Lawley arrived, Boulton also notes, they were largely appraised for “their gender attributes not their undoubted intelligence”.

Writing about the decline of the old-school anchor this summer, Ryley recalled Burnet’s farewell broadcast in 1991 and argued that the 1960s model he personified was “actually a triumph of form over substance”, with little depth of coverage. “It was akin to a daily act of worship, with Burnet performing the role of the nation’s vicar.”

ADAM BOULTON : “I remember being delayed at a German airport while Dan Rather’s private plane took off after some Nato summit”

Before he pronounced that “the age of the all-powerful anchor is gone”, Ryley also pointed out that if millions do tune in now, it is to watch the prime minister instruct us to “stay at home”, or to see the Queen reassure us “we will meet again”. It looks as if the key organs of state have learned to go directly to their citizens and subjects.

When the 24-hour news services arrived and needed to create a bit of audience recognition, it was as likely to come from a familiar reporter as from the face in the studio, said Boulton. In America, richly paid screen stars were rewarded for their biased slant on the current affairs, with Sean Hannity and Tucker Carlson, of the right-leaning Fox News, or Rachel Maddow, of the liberally inclined MSNBC, becoming national figures.

“In the US, polarisation and prejudiced opinion works – a far cry from Walter Cronkite’s vision of himself as the conscience of the nation, on a par with a big city fire chief,” Boulton complains, also expressing relief that the trend has not yet entirely taken off in Britain.

At stake is, well, what exactly? While some argue we are about to throw away concern for the serious tone of news, others warn of the greater danger of losing all contact with younger viewers. News habits will not form unless the hi-tech, staccato communications methods employed by the BBC’s Ros Atkins or by Anushka Asthana, standing at her data screen on ITN’s Peston, swiftly replace the static anchors.

For one leading television news executive there is no point clinging to the old ways. “Anchors do not work in the digital news world. And the really big interviews, like Emily Maitlis meeting Prince Andrew, don’t come along very often.”

The problem facing television is that while an avowed great like Boulton once ably held lengthy studio broadcasts together, “no one has that level of experience now”.

For Asthana, watching Boulton work during her time at Sky News was a lesson in craft. “He is one of the most impressive broadcasters I’ve ever worked with,” she said. “I don’t think people realise how hard it is to do 10 hours of coverage of a live story and be over every twist and turn. Adam is a towering figure. And his transformation from political editor to presenter was seamless.”

And Boulton? He is unable to stop himself mourning the death of the idea that the contract between a regular news anchor and a viewer is more than just commercial branding: “The relationship of an individual with the audience matters. Those who survive manage to establish an inadvertent rapport of trust with the audience over decades on screen.

“These relationships have value for both the audience and the broadcasters.”