Keeping the nation together – BBC 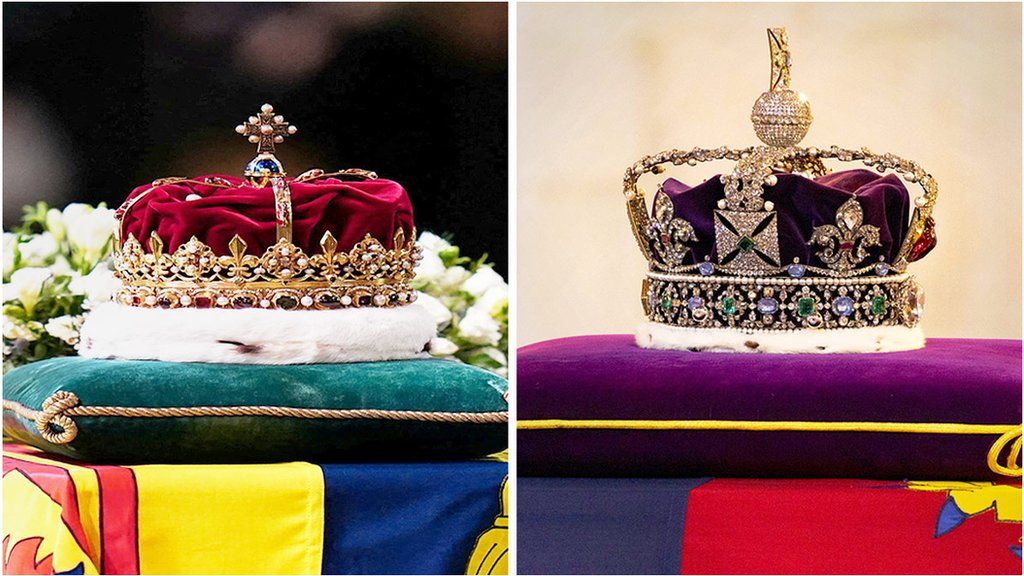 Answering the many questions I have asked myself during the coverage of the new King’s visits. Article by Alan Little for BBC News website published 17/9/2022

King Charles has done two things simultaneously this week that reveal much about what kind of reign he aspires to. First, he has led the nation in the ritualising of its sorrow – a sorrow that has been quietly expressed and subdued but it is nonetheless real. And second he has signalled to us in the clearest terms possible that this is a reign that will put the future of the Union – the integrity of the United Kingdom itself – at the heart of its concerns.

In choosing to visit Edinburgh, Belfast and Cardiff, as well as return to London, King Charles has demonstrated how fully the Royal Family and household have understood the nature of the United Kingdom as a Union state – a partnership of nations.

Everywhere he went there were gestures of respect and, indeed, affection for the distinctiveness of each of the three devolved nations. And in that, as in much else, he is following what he called, in Northern Ireland, the “shining example” set by his mother.

We saw the coffin of the Queen for the first time as it slipped through the gates of Balmoral in its glass-sided hearse. She is the first reigning monarch to die in Scotland in nearly 500 years. “I have to be seen to be believed,” she had famously remarked in life; now she was performing the same service in death.

The cortege made its way slowly through royal Deeside, slowing down to pass through towns and villages, where the people know her not just as the Queen, but as their neighbour. She had known this landscape since she was a child: Aboyne, Ballater, Banchory, Peterculter, through Aberdeen to Bridge of Muchalls, Stonehaven and south to the Scottish capital. They stood by the side of the road as the cortege passed, in quiet contemplation.

What was the symbolism of this measured progress through the green spaces, the little neighbourhoods, she loved, if not to say: “I am rooted here; this has been my home.”

For that’s what Balmoral was – a private home and not a royal residence. She made no secret of the fact that she loved it more than any place in the world. It was where she found respite from the burdens of state and the unyielding gaze of the public.

I have been struck all week by that gaze. It has followed the new King and those closest to him throughout. Other than a brief time at Highgrove spent in quiet contemplation, King Charles and the Queen Consort have spent almost every waking hour since the Queen died in the public eye. This, at a time when they and their family are carrying what must be an intense private sorrow. This is a family on whose grief the eyes of the world intrude. Duty calls them to sublimate their private sorrow to the imperatives and demands of public ritual

This, too, is surely the legacy of the late Queen – it is the steadfastness and constancy with which she adhered to her idea of public service, now visible in her son.

Crowds gathered in the streets of Edinburgh’s magnificent old town as her coffin was taken to lie in the Palace of Holyroodhouse, the monarch’s official residence in Scotland. You could sense the intimacy and informality of that journey from Balmoral gradually yielding to the rituals of statehood and official mourning.

History seeps from every stone of that house. This was where the Queen’s ancestor King James VI of Scotland learned, in the middle of the night, that he had inherited the throne of England on the death of the first Elizabeth, thus uniting the two kingdoms under one Crown for the first time. In that sense, the Queen was brought to lie in rest in the building that could be said to be the birthplace of the first Kingdom of Great Britain.

The Royal Household’s attention to the sensibilities and distinctiveness of the three devolved nations of the UK has been striking, not just this week, but for many years. When, in 1999, the Queen opened the first Scottish Parliament in 300 years, she gave permission for the then presiding officer to refer to her by what he called her proper title – Elizabeth, Queen of Scots.

She, herself, when she was in Scotland, referred to her son and heir not as the Prince of Wales but as the Duke of Rothesay, his Scottish title. When they took the Queen’s coffin to lie in rest at St Giles’ Cathedral, they placed upon it the Crown of Scotland, the centrepiece of the Scottish crown jewels. It is 500 years old, the oldest surviving royal crown in Britain and Ireland, made for the Queen’s ancestor King James V.

Consider the symbolism – it is a gesture toward the distinctiveness of Scotland and its historic nationhood.

What have we learned about the kind of reign that the King aspires to? This week, above all, he has sought visibility; like his mother he wants to be seen, to forge a strong link between Crown and people. It was those moments outside, in the street, among the people crowding to see him, hands stretched out to take his, that he seemed to come alive. These were the moments – moments of easy informal engagement – that seemed to energise and excite him.

We watched him at Hillsborough Castle in Northern Ireland, being addressed by Sinn Fein leaders who do not recognise the legitimacy of his Crown in their country. And yet they spoke to him with sympathy for his loss, and spoke with immense warmth about his late mother.

Alex Maskey, the Sinn Fein speaker of the Northern Ireland Assembly, a man who was twice interned without trial during the Troubles, stood in the Throne Room at Hillsborough and spoke directly to the British King of the leadership qualities of his late mother.

He also praised the role those qualities had played in bringing peace to Northern Ireland. He said she had deployed gestures that seemed small, but which had an enormous impact in promoting reconciliation. King Charles replied that he would seek to follow what he called his mother’s “shining example” in bringing together “those whom history has separated”.

The last leg of his tour was to the country whose title, he said, he had borne with pride for more than half a century: the title Prince of Wales, one he now passes to his own heir. His relationship with Wales is intimate. As a student he learned Welsh here, and spoke Welsh at his investiture as Prince of Wales in 1969.

Here, bilingualism is part of the distinctive character of the country. He and the Queen Consort attended a Service of Prayer and Reflection for the life of Queen Elizabeth, at which the First Minister, Mark Drakeford, read from the First Book of Kings in Welsh. It incudes the verse: “And now, Oh Lord, you have made your servant King.”

Llandaff Cathedral, where, the service took place, is almost 1,000 years old. It was rebuilt after being bombed in the Cardiff blitz. It connects us – and the Royal Family – to the great shared British experience of the World War Two. Queen Elizabeth’s visit here in 1960 marked its restoration, a symbol of the long recovery from war and its aftermath that characterised the early years of her reign.

Queen Elizabeth, too, hugged the devolved nation close. She made multiple visits to the Scottish Parliament, and attended every opening of the Welsh Assembly and Senedd.

But among the cheers from the crowds Charles encountered in Wales, there were also boos and chants of “Not my King”. This dissent was an echo of pockets of anti-monarchy protests in other places throughout the week.

“I think the biggest danger to the union is arrogance around its continuation,” Laura McAllister, professor of public policy at Cardiff University told me the day before the King’s visit to Cardiff. “I suspect the monarchy has got perhaps even greater sensitivity than politicians to this because there’s a real sense of understanding the cultural and political heritages of each of the nations is very different,” she said.

She said the Queen had reflected that in her remarks when she was opening the National Assembly and then the Senedd and expected King Charles to do the same.

And he did. Here, too, he spoke of his late mother’s – and his own – affection for the country. Perhaps more telling there was the gesture toward the distinctiveness of the character of the country. On the floor of the Senedd, he replied to a motion of condolence from members of the assembly in both languages.

“Through all the years of her reign,” he said, “the land of Wales could not have been closer to my mother’s heart. I know she took immense pride in your many great achievements – even as she also felt with you deeply in time of sorrow.

“It must surely be counted the greatest privilege to belong to a land that could inspire such devotion. I am resolved to honour that selfless example, in the spirit of the words by which I have always tried to live my own life: ‘Ich Dien, I Serve’.”

When his mother came to the throne in 1952, the integrity of the United Kingdom was a given. It is telling that King Charles has chosen, as the first act of his reign, to tour the devolved nations. For the landscape is changing.

In Northern Ireland, Sinn Fein, a party that seeks to lead Northern Ireland out of the Kingdom and into the Republic, is now the biggest single party. In Scotland, support for independence remains a little below 50 per cent, and has much higher support among the young.The early decades of Queen Elizabeth’s reign were characterised by the long, slow contraction of British imperial power overseas and, in the end, the dissolution of the Empire – an outcome that would have shocked and dismayed earlier generations.

It was her leadership that transformed the Empire into the Commonwealth. Most of its members chose to become republics. Fourteen Commonwealth realms remain, in which King Charles becomes head of state, including Jamaica, Australia and New Zealand. King Charles will be alert to the possibility that that process could resume, with the potential that some of those realms will also become republics.

He will also be alert to the possibility that his own reign could come to be defined by the loosening of the bonds that have traditionally held the Union together.

Queen Elizabeth was a powerful force for unity. She came to embody much of the character of Britain itself. We looked at her and saw a set of values – though each of us would have defined those values differently – around which the country cohered. She was the last living royal link with WW2, perhaps the founding shared experience of the modern British identity.

What will happen to that legacy, to the way of being British that she reflected back to us, when this period of mourning is over and she begins to slip into the middle distance of our collective memory?

That the new king inherits a powerful legacy of public affection for his mother has been clear this week. But the enthusiasm of those who turned out in Edinburgh, Belfast, Cardiff, London and across the country will not disguise for long the strains that the country is under.

King Charles signalled to us this week that he intends to put the future of the Union at the heart of his reign. The Royal household will not make the mistake of seeing those crowds as incontrovertible proof that the Union is secure. We can expect this to be a reign that will hug the devolved nations of the Kingdom close.