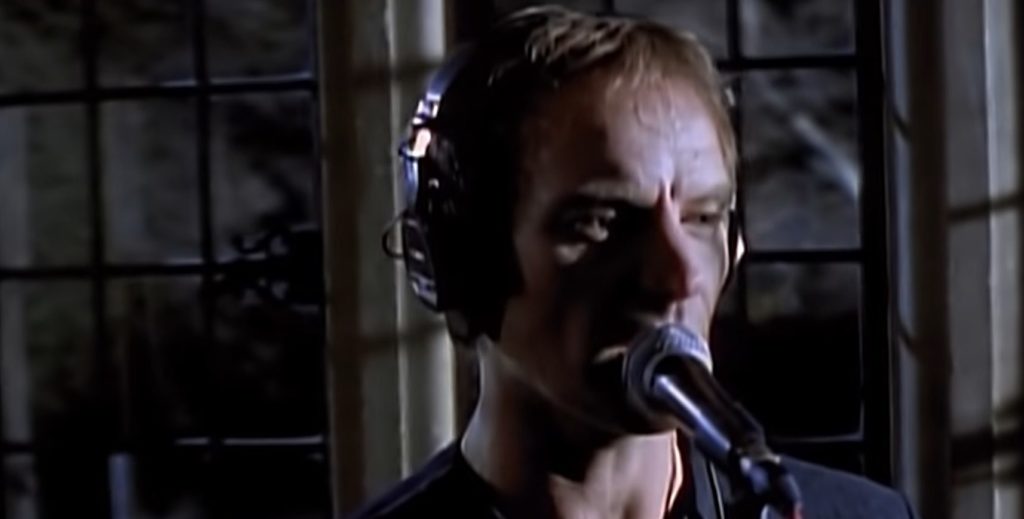 [Sting]: This version was second. I wanted this record to be very much a, uh, a, a, record, if you like, of my work over six months. Or seven months. And I wrote this song during this period. I actually wrote it for Eric. Him and Michael Kamen were doing the soundtrack and they phoned up and said, “You know, maybe you could write a theme song.” And, um, they played me the theme that they’d used in the previous two movies. So I adapted the changes in that and wrote a melody and a, and some lyrics. The hard thing was, you know, what do you write about? And they said, “Well, it’s a “buddy” movie. We want a “buddy” song.” So, having, having seen LETHAL WEAPON, I thought, well, they’re kind of buddies who can’t really express, you know, they can’t really say, “I love you.” It’s that male thing. So there’s a kind, there’s going to be a kind of reticence. Uh, uh, I was sort of searching my mind for a sort of phrase that would, would give the impression of reticence and yet deep love. And so, so, it’s the idea of “it’s probably me. (laughs) You know? If there’s someone out there who’s gonna, you know, save your life or who you can count on. It’s probably me. And, and the word, “probably,” kind of clenched it for me. So, I sent it back to Warner Brothers and Michael Kamen went, “Oh, we love it! It’s great! Why don’t you sing it?” I said, “Nah! I’m washing me hair this weekend,” y’know? And they said, “Oh, come on!” So, I, I came over to New York and sang it. And Eric played – played a beautiful guitar solo. So, then I decided that I’d like to do it with the band in a different way. And I think, um, it was just different. I don’t think it was better or worse. I think that what we arrived at is a slightly more nocturnal sound. And I think it’s important too, that the skeleton of a song is, is what you build on. And the record is only a blueprint. And so, uh, you can change and adapt. Change keys, change, change the structure, change the feel, change the vibe. Just breathe new life into it every time you do it, otherwise, it’s, you know, you set it in stone and it’s dead.