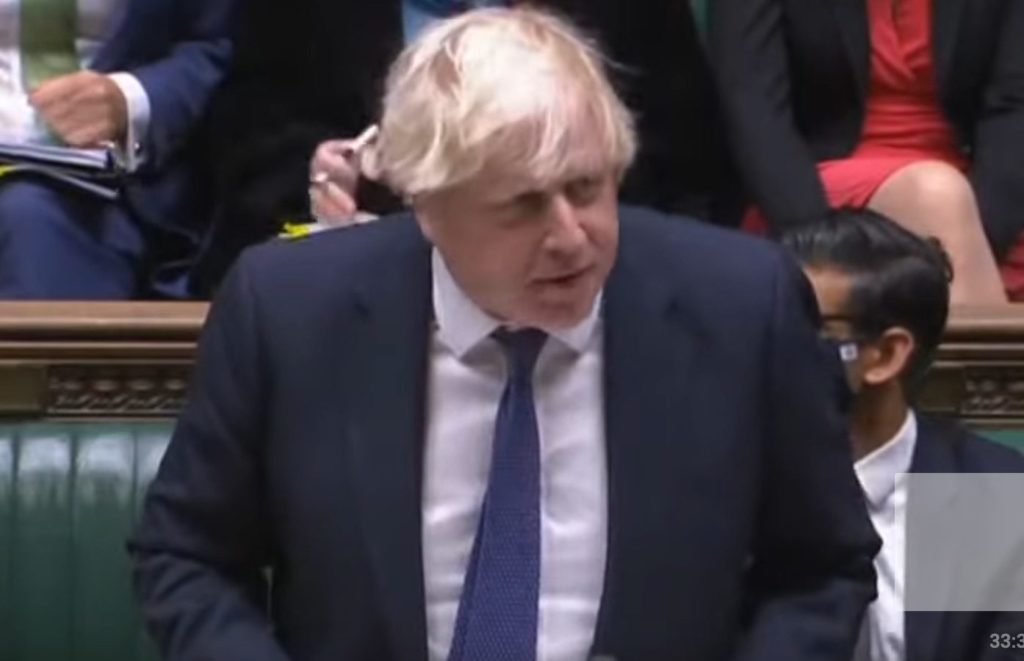 It was yet again the gaps on the Tory benches that most caught the eye. During the good times it’s standing room only for prime minister’s questions, but these days the three rows behind the government frontbench are barely half full. And it’s almost certainly not because dozens of Tory MPs are preoccupied with their second jobs: it’s because they are profoundly pissed off with the way Boris Johnson is doing his first one.

Mind you, the ones who did show up as a token gesture of support to their hapless leader may well have made a mental note to give PMQs a swerve in future weeks. For what we got was Boris at his absolute worst. Not the “everything’s great, Bertie Booster” Boris. Not even the nauseating, ersatz absent-minded joker Boris. But the raw, childlike, unchannelled, psychotic Boris. Angry, out of control and out of his depth. Lashing out randomly while blaming others for his own shortcomings. The shallowness of his empty narcissism ruthlessly exposed. Not a pretty sight and one normally only seen by women and friends he has betrayed.

To no one’s surprise, Keir Starmer focused on matters of trust. Never Johnson’s strongest suit even on a good day. And especially not now. Could the prime minister guarantee not to go back on his promise to build both a new railway line between Manchester and Leeds and the eastern leg of HS2? “Pifflepafflewifflewaffle,” said Boris. We can almost certainly take that as a no then.

The Labour leader then moved on to sleaze and Tory corruption. Other people had apologised. Would he? Again Johnson made no pretence to answer while Jacob Rees-Mogg, the homunculus in an oversized suit who is the unthinking person’s idea of a thinking person, shook his head furiously. He definitely hadn’t apologised. Oh, no. He had only expressed the mildest regret. Saying sorry was for the little people. It wasn’t a great look.

“But what about the money you took from Mishcon de Reya?” Boris asked. “The leader of the opposition is guilty of Mish-Conduct”. He was so pleased with that schoolboy gag that he repeated it three times. For some reason the Tories have got it into their heads that Starmer had been taking money to help Gina Miller stop Brexit. They don’t appear to have noticed that the payment was received in 2016, well before Miller got involved in her legal fight. Details, details …

But Johnson went on and on, eventually getting called out by the Speaker for being generally unpleasant and obstructive. Keir normally plays it safe and passionless, but this time he went for the jugular. Johnson was a coward, not a leader. Someone who had been investigated by every organisation to which he had been elected. And most places that he’s worked, for that matter. He can’t say sorry – he believes the rules don’t apply to him and he rows back on every promise. “The joke isn’t funny any more”. It hasn’t been for a while.

Things didn’t get any better for Boris when he appeared before the liaison committee, the supergroup of select committee chairs, later in the afternoon. Even the mild mannered William Wragg, who is one of the more docile Tories, inadvertently managed to get the better of him by asking Boris a simple question about the ministerial code. Something in which Boris doesn’t believe, having forced one independent adviser to resign by refusing to accept his findings on Priti Patel, and replacing him with Lord Geidt – the Geidtadoodle – who could be relied on not to find anything compromising about Johnson’s own financial arrangements.

Johnson smirked nervously, but somewhere in his subconscious was a growing realisation that the comedy was turning to a personal tragedy. He was the chancer who had been found out by his peers. Even his own backbenchers had turned on him. Sick of U-turn after U-turn and U-turns on U-turns. Taken for mugs and made not just to look stupid, but corrupt with it.

Labour’s Chris Bryant quietly and methodically took advantage of the prime minister’s discomfort to expose what everyone had long suspected. That Boris hadn’t bothered to read the Owen Paterson report before whipping his MPs to ignore it. Just too much hassle. Too much work. Policy had been constructed on the hoof, reacting to whatever shitshow had been going on at the time. But he couldn’t remember telling John Whittingdale that there was definitely cross-party consensus for his sham committee. Even if Whittingdale could.

It soon got worse. Yvette Cooper was having none of Johnson’s usual prevarications. Did he think Paterson had broken the rules or not? Just saying he had fallen foul of the rules wasn’t good enough. Boris looked horrified at being asked to tell the truth. But he ran out of road and had no option.

Cooper pressed on. People expected even higher standards of the prime minister – news to Johnson – so why hadn’t he worn a mask at Hexham hospital. “There was barely 30 seconds when I wasn’t wearing a mask?” he whined. So that’s all right then. It was just bad luck that was the 30 seconds in which he was photographed. Perhaps there was a sign in that corridor saying “please don’t wear a mask here”.

If Boris thought his troubles were over once the questions moved away from sleaze, he was badly mistaken. Everyone went for him. Particularly his own MPs. Mel Stride, Philip Dunne, Julian Knight, Tobias Ellwood and Jeremy Hunt all took chunks out of an under-prepared and badly briefed Johnson. The prime minister’s life was also falling apart in the Commons where an embarrassed Gillian Keegan was forced to explain how the government had managed to lose – presumably in the incinerator – the records of the phone calls between Paterson, Randox – who paid him more than £100,000 a year – and former health minister Lord Bethell.

It felt like a moment of no return. The government was in meltdown. Rules on second jobs were going to be kicked into the long grass. A minister had just guessed three separate figures of 10, 15 and 20 hours that MPs could freelance each week. Chaos. Johnson had never given much of a shit about his own MPs. But they had cared about him. Especially, the “red wall” MPs elected in 2019. They had believed he was a winner. Now though, the last of his stardust had been brushed away. And all that was left was an emperor in all his pallid nakedness. From now on, it was every man and woman for themselves.