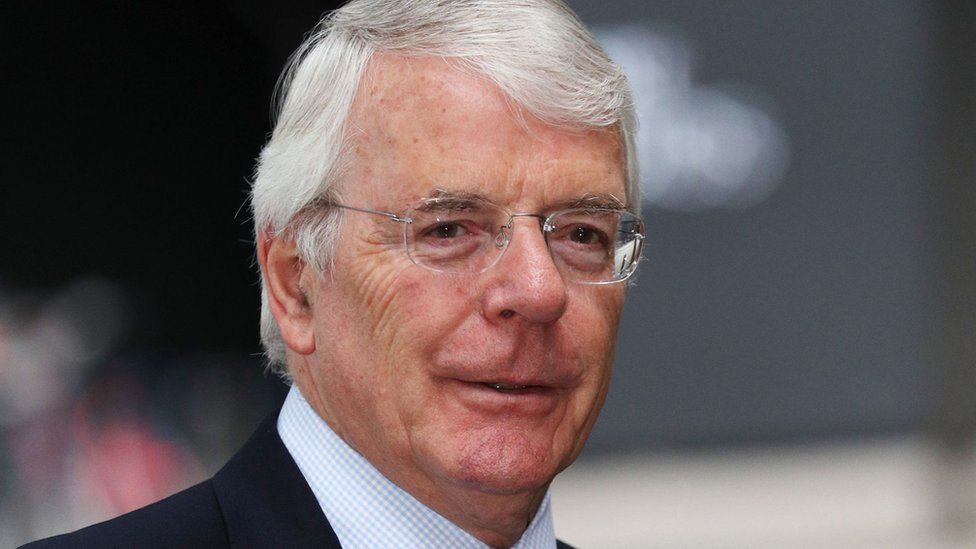 Former Conservative Prime Minister Sir John Major has criticised the government’s handling of Owen Paterson’s case as shameful and wrong.
In a BBC interview, he said the actions of Boris Johnson’s government had trashed Parliament’s reputation at home and abroad, and were “un-Conservative”. This week, the government tried to block the suspension of Mr Paterson, who had broken lobbying rules – but then reversed its decision. The government has apologised.

On Wednesday, Tory MPs blocked the Commons Standards Committee’s recommendation that Mr Paterson should be suspended for 30 days by calling for an overhaul of the MPs’ standards watchdog instead. They initially had the backing of No 10, but Downing Street reversed its decision after a furious backlash by opposition MPs and some Conservatives. Mr Paterson then resigned as MP for North Shropshire, saying he wanted a life “outside the cruel world of politics”.

Sir John suggested the Johnson administration was “politically corrupt” over its treatment of the House of Commons and said its attempt to overhaul the standards system was “rather a bad mistake” but “isn’t a mistake on its own”. “There’s a general whiff of ‘we are the masters now’ about their behaviour,” he said. “It has to stop, it has to stop soon.”
Sir John told BBC’s Radio 4’s Today programme: “I have been a Conservative all my life. And if I am concerned at how the government is behaving, I suspect lots of other people are as well. “It seems to me, as a lifelong Conservative, that much of what they are doing is un-Conservative in its behaviour.” “This government has done a number of things that have concerned me deeply: they have broken the law, the prorogation of Parliament. They have broken treaties, I have in mind the Northern Ireland Protocol. They have broken their word on many occasions.”
Analysis by Chris Mason:
Let’s be clear: Sir John Major has been a critic of Boris Johnson for some time. During the EU referendum he reckoned the NHS would be as safe under Mr Johnson and Michael Gove as a pet hamster would be with a “hungry python”. And he voted for Jeremy Hunt, not Boris Johnson, to be Conservative leader, because, as he said at the time: “I cannot vote for someone who was part of the Brexit campaign that misled the country.” So we shouldn’t be surprised that he is a critic. But nonetheless it is still quite something when a former Conservative prime minister delivers such a detailed, lengthy and withering critique as Sir John just has of the current Tory prime minister.
He went on to describe the government as “perhaps politically corrupt” in its briefing of parts of the press well in advance of any public announcement or statement to Parliament. Asked about reports Owen Paterson could receive a peerage, Sir John said he thought it “would be rather extraordinary if that happens” – adding that he was unsure it would be approved.
Sir John’s own Conservative government in the 1990s was brought down in part due to allegations of sleaze and the cash-for-questions scandal where MPs were offered money in exchange for asking parliamentary questions. This was “immensely damaging, it was embarrassing, it hurt Parliament”, Sir John said. “When that happened I set up the Nolan Committee on Standards in Public Life to stop it, which has been a huge success.
“The striking difference is this: in the 1990s I set up a committee to tackle this sort of behaviour. “Over the last few days we have seen today’s government trying to defend this sort of behaviour.”
The BBC has asked the government to respond to Sir John’s remarks.
Meanwhile, opposition parties have discussed backing an independent anti-sleaze candidate in the North Shropshire by-election, which will be held now Owen Paterson is standing down from Parliament. The parties have been looking at the 1997 election in Tatton, Cheshire, when journalist Martin Bell stood as an anti-sleaze candidate and defeated the sitting Conservative Neil Hamilton, who had been embroiled in the “cash for questions” affair. Labour has ruled out standing aside in the forthcoming by-election, but Mr Bell said it might be something they come to regret. He told BBC’s Breakfast sleaze was an issue that “really cuts through to people in a way that others don’t”. He added that he doubted any party would be able to overturn Mr Paterson’s majority.